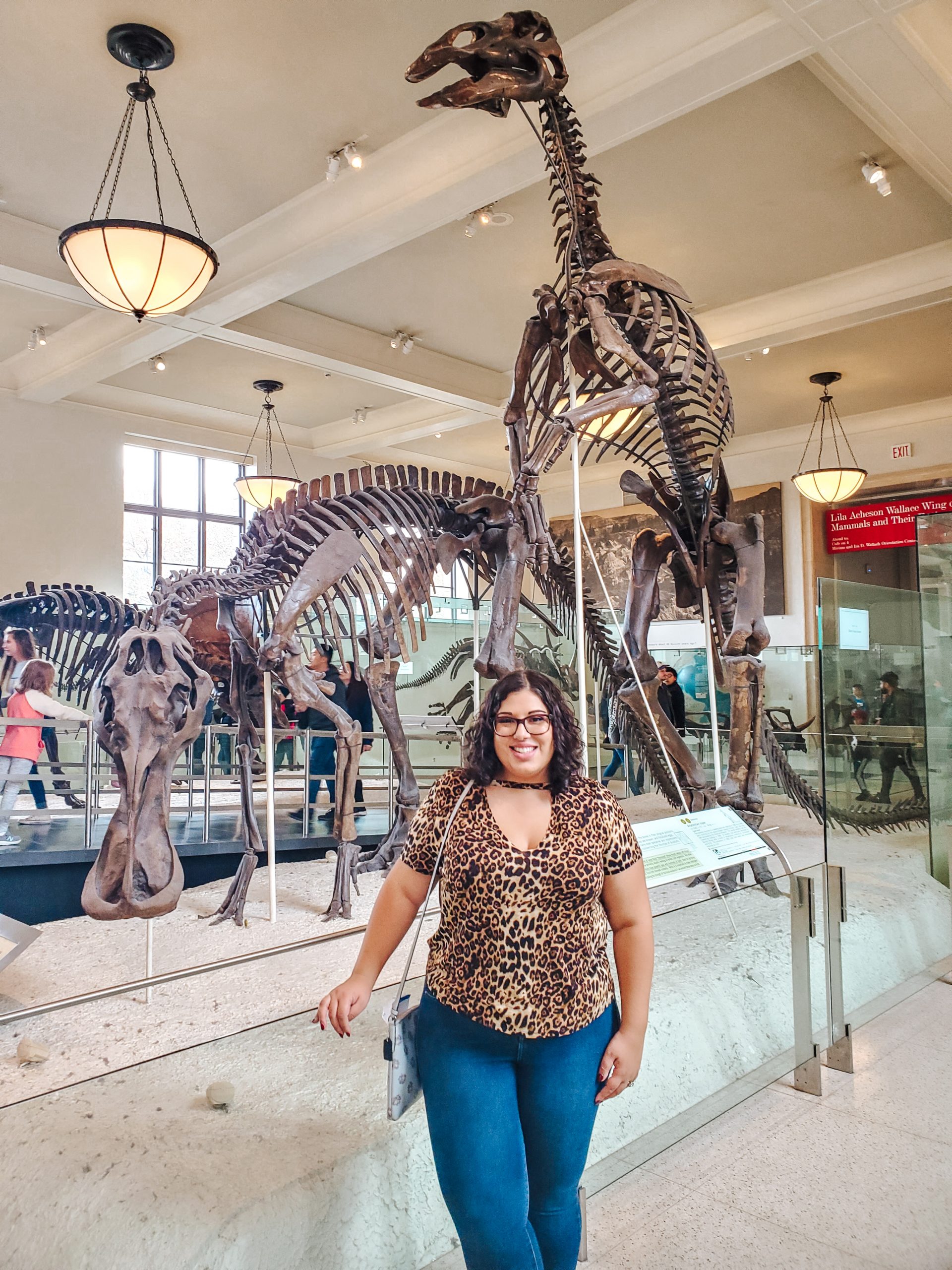 One of the things I love about living in New England is that we’re able to hop in the car and drive to so many different areas around the North East– So last weekend when Chaz and I realized we were both off on the same day (crazy, I know!) we decided to head to New York City for the day to see the T. rex exhibit at the American Museum of Natural History!

If you know me, you know I love dinosaurs! I was always fascinated with them as a kid and since working in DinoLand during my Disney College Program I’ve basically become even more obsessed. When I saw that there was a T. rex exhibit just a couple of hours away I just had to go, and thankfully Chaz is a good sport. T. rex: The Ultimate Predator focuses exclusively on T. rex, this species along is encompassed in about 100 million years of evolution. (Cue Dr. Seeker talking about the early Cretaceous period…) The exhibit even went so far as to include that T. rex, along with lots of other species of dinosaurs, likely had feathers. This is something that paleontologists have really been aware of for some time, but it’s also something that you rarely see reflected in dinosaur exhibits and attractions so it was really near to actually see feathers on some of the models and learn more about how fossils show evidence for them. All of this is interpreted through the exhibit’s full size casts and models, fossils, and interactive gallery spaces.

Another refreshing takeaway from this exhibit was that we got to learn about T. rex through its different stages of life. Where most interpretations of a T. rex show its fully grown self, and therefore present only this side of its story, I really enjoyed learning more about the earliest stages of their lives. Baby T. rex is actually pretty adorable– If we could get this guy on some t-shirts and tote bags alongside the older designs we usually see I would be totally okay with that. Other parts of the exhibit focus on where the T. rex fits into its larger tyrannosaur family. T. rex is always the first tyrannosaur that comes to mind, but there are actually plenty of tyrannosaurs and many of them were more prevalent during their lifetimes than the T. rex. The Dilong paradoxus, the first member of the tyrannosaur family known to have had feathers is also featured in this part of the exhibit. With its longer arms and over smaller size, Dilong paradoxus really doesn’t appear all that similar to our standard vision of T. rex so we were really intrigued learning about how all of these different tyrannosaurs were related.

The rest of the exhibit primarily focuses on what I assume is why most people are interested in T. rex in the first place– Their size and strength. It was really incredible to learn in so much detail how smaller dinosaurs like Dilong paradoxus ended up evolving into the T. rex more similar to what you’d see in Jurassic Park (but not quite… feathers, remember?). Of course, like any good dinosaur exhibit, T. rex The Ultimate Predator is littered with unanswered questions. Some scientists believe that T. rex consumed members of its own species, and while this is a fairly widely accepted theory it’s difficult to confirm one way or the other. We do know that their teeth were strong enough to crush bone and that evidence of a T. rex has occasionally been found within fossils of another T. rex, but it still leaves paleontologists with questions, namely: If T. rex did eat other members of its species, how common was this? Would they only eat another T. rex if it were already dead?

Other unanswered questions related to T. rex come within its early life. We can learn a lot from fossils but so far they have yet to give paleontologists substantial evidence for how T. rex were as parents. Were baby T. rex largely on their own or were mom and dad always pretty close behind? Or as is the case with many species of animals, were both parents even in the picture? In other exhibits unanswered questions may be frustrating, but this is one of the things that I really love about dinosaurs. It’s honestly thrilling to think how new discoveries are still being made and how even when we think we know all there is to know something new could just as easily pop up. T. rex: The Ultimate Predator is on view at the American Museum of Natural History through August 9, 2020, so if you’re waiting for warmer weather for your next trip to NYC you have plenty of time to get over there. There are plenty of permanent T. rex exhibits and information available at most science museums, but this one really stuck out to me because it went into so much detail on how T. rex was similar and different to other dinosaurs during its time and it focused primarily on the evolution of the T. rex.

If you make your way to the American Museum of Natural History, don’t miss the Titanosaur, a dinosaur skeleton that’s so large it couldn’t be contained in one gallery, and their permanent collection of dinosaur skeletons and fossils. AND make sure you save some time to visit the museum’s Dinostore! It took some serious self control for me to not buy basically everything, but if you’re looking to some dinosaur t-shirts, books, jewelry, and more be sure to stop there on your way out.

Learn more about this exhibit here and let me know what your favorite museums are to see some dinos in the comments!