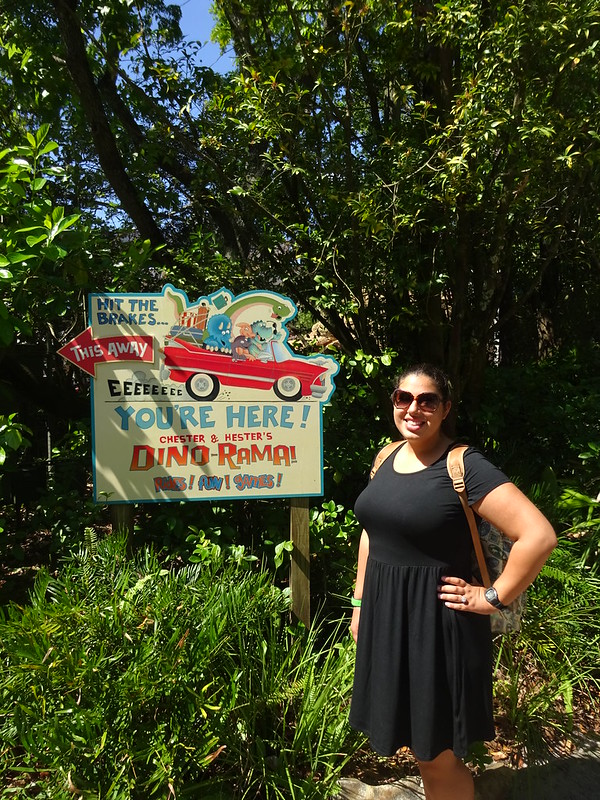 When I was accepted to participate in the Disney College Program for a role in Merchandise, my mom asked me if there was anywhere I would not like to work. I responded with anywhere except DinoLand. I loved dinosaurs, and I love Animal Kingdom, but DinoLand U.S.A. was just always a place that I thought was super tacky and out of place at Walt Disney World and simply put not my style at all. Plus, I heard that the carnival games in DinoLand were actually run by Merchandise Cast Members and not Attractions Cast Members, and I knew I wanted nothing to do with that level of public speaking, so I found myself basically hoping for any other work location. Of course though, I ended up being placed at DinoLand U.S.A.

As expected, most of my time in DinoLand was spent working on carnival games. When I wasn’t on games, I was either in Chester & Hester’s Dinosaur Treasures or one of the carts located in the area, or inside the DINOSAUR ride gift shop (which was always the dream). I could have also had stock shifts in theory (which are exactly what they sound like) but for whatever reason I was never really scheduled for stocking. The problem with DinoLand merchandise, at least when I was there which was admittedly almost six years ago now, is that non-DinoLand Cast Members could pick up shifts there and when they did, they wouldn’t be able to work on the games because they hadn’t been trained there. So the way the rotation worked, if there were enough random, non-DinoLand Cast Members for the day, the people statused in DinoLand (like me) would likely spend their entire day on games. Working on carnival games for a job particularly after graduating with a B.A. in history and signing up for an internship where you figured you’d essentially be selling overpriced t-shirts or candy is a strange situation. And the fact that it was carnival games in a Disney theme park made this set-up an even more peculiar one. Carnival game hosts (carnies?) by nature are typically thought of as a little seedy and the kind of people who are out to scam you for your money by getting you to play rigged games in exchange for a chance at winning something so cheap and poorly made you could have easily purchased it from your local dollar store.

Disney’s carnival games are different though. DinoLand U.S.A. is surely designed to look like a parking lot with some cheap and tacky Dinosaur-themed rides and games set up. But being that this is a Disney theme park, the games in DinoLand are actually not rigged at all, and while the prizes probably aren’t the best use of your money they’re not nearly as bad as what you’d find at your local carnival. Although I never expected to come to Disney and interact with guests in any way that didn’t totally align with the company’s industry-renowned guest services training, the juxtaposition of being a Disney Cast Member while essentially being trapped within a carnival game is definitely a weird one. There’d be times where guests would seem to forget that DinoLand isn’t their local carnival and you can’t really haggle or anything like that with the Cast Members and while it didn’t happen often it was always a strange interaction when it did. Then you had guests who thought that playing the game = getting a prize. If it was an abnormally slow day, there may only be one family playing a game in which case someone in their group would get the prize. But on busier days, sometimes guests would want to have their own games to guarantee themselves a prize and it was difficult if not impossible to do that without causing a massive backup and making other guests wait to play. Mostly though, the stressful parts of running a carnival game were the same kinds of things that would be stressful in any entry-level customer-facing job…things like parents letting their kids stand on games when they shouldn’t be doing that for their own safety, or multitasking when you’re trying to explain the rules to one person and someone else is trying to buy tickets, or even just spieling while selling tickets to multiple parties at once.

The most difficult part of all this though, at least for me, was the public speaking. At least from my own experience, I don’t think most carnies really go above and beyond spieling and hyping up what’s going on during the games, but in Disney everything is a story so spieling throughout the entirety of the experience for the guests only made sense. Games like Mammoth Marathon (aka skeeball) or Whack-A-Pachycephalosaur (whack-a-mole) required constant spieling. After giving guests all the rules and safety info you’d have to continuously spiel something like “#3 is in the lead, followed closely by #7, then #4. Looks like #6 is catching up, keep rolling those snow balls to get your mammoths to run quicker- looks like #9 just took the lead, #3 is going to have some work to do to catch up…” This constant spieling was particularly exhausting when you’d be running a kids-only game, something that we were always encouraged to do when a bunch of kids were already planning to play and an adult showed up with a ticket. On Whack-A-Pachycephalosaur, you only needed to get a score of 150 to win, a task that should go by fairly quickly where each hit was 10 points, but with all kids playing sometimes my spiel would turn into something like “Keep whacking those dinos…keep going you guys are doing great! If mom and dad want to step in and help move this along that’s fine…adults feel free to help…” I think my longest game of Whack-A-Pachycephalosaur went on for almost 30 minutes with parents who didn’t care to step in.

Plenty of positive interactions game out of working on carnival games though, despite the public speaking aspect absolutely not being my thing, Disney has a way of making you feel comfortable with it mostly with the leniency in how you’re allowed to create magical moments for guests. On Brontoscore (basketball), I’d often give kids extra balls on one ticket if they missed their first three shots, and on slow enough days I’d happily just let them keep going on the same ticket until they got a basket so they could at least get the smallest prize. If it was quiet enough that only one guest was around to play something like Whack-A-Pachycephalosaur or Fossil Fueler (a target game with a water fun) I’d pull a nearby Cast Member and get them to play, really hyping up to the guest that they had some steep competition playing against someone who worked there while letting them win of course. Some of the best magical moments even came with making parents happy as opposed to kids. When two siblings would be playing a game and ultimately one would win, I became pretty skilled at sensing an impending meltdown and would give both kids prizes- you can certainly argue that that’s the participation trophy type logic a lot of people generally hate, but I’d argue back and say that the look of relief on the parents’ faces that they wouldn’t have to deal with a meltdown of that sort on a 90+ degree day in a Central Florida theme park was well worth it.

Working in DinoLand and specifically on the carnival games taught me a lot. Some logistical things like ‘don’t bother wearing mascara when the heat index is 106 and you’re basically standing in a toaster all day (in the case of Fossil Fueler where you’d have to stand between rows of neon “gas pumps” that gave off heat) because it will melt off to being able to collect cash from eight families at once, ring them all out, and correctly disperse their change and tickets all while giving a safety spiel. But I also learned things like public speaking is actually not that horrible (especially when you have a microphone). A microphone definitely gives you some weird sense of power and makes it easier to feel and come off as confident even when the idea of public speaking totally freaks you out. And it probably took my entire program to get over the fact that I hated public speaking, but by the end of it I was pretty comfortable on doing it, something I never thought I’d say when I was telling my mom why I didn’t want to work in DinoLand. It also taught me that basically everyone thinks dinosaurs are cool (which they should, duh). I love dinosaurs, so I’d always sprinkle in dinosaur facts at the games whenever it made sense to. (My favorite was at Whack-A-Pachycephalosaur- I’d always wonder if the game being such a themed version of whack-a-mole, I mean, you’re hitting dinosaurs in DinoLand…seems weird, right? I’d always wonder if kids especially would be like ‘why are we doing this?!’ So sometimes I’d share facts like how Pachycephalosaurs had 10 inch thick skulls, so they’re hardly feeling a thing when you’re hitting them with a rubber mallet). From working in the public history field it’s become abundantly clear to me that getting the average visitor into learning about anything on vacation is no easy task, but for most people if you throw some dinosaur facts out there they’ll become pretty interested. I guess we just need to figure out a way to sneak some dino facts into smaller museums and historic sites and we might be onto something…

I think mostly though, working in DinoLand taught me that it’s important to step out of your comfort zone. Doing the Disney College Program was something I had wanted to do for my entire life. I had researched the entire process from beginning to end extensively before I even applied, and when I was accepted for Merchandise with eight years of retail experience under my belt I felt totally comfortable despite the fact that I was moving thousands of miles away to live with strangers while I did it. Then I found out I’d be running carnival games and interacting with guests on a microphone and I began to panic. I’m not sure my anxiety over public speaking would have gone as well had this job not been with Disney and specifically with the trainers I had who gave me a lot of support and really helped sort of force me out of my comfort zone in a way that I clearly needed, but whatever the case the whole experience definitely showed me the importance of trying new things even when they’re a little frightening and not quite what you planned. Lastly, I have some serious skills with carnival games now. The games in Disney aren’t rigged (Comet Crasher is totally a game of luck, not skill but otherwise if you know what you’re doing you should be able to win) but I’ve had so much practice on carnival games now it’s the weirdest hidden talent I think I could ever possibly have. Basically if you have your eye on some grand prize at your local fair or carnival hit me up and I’ll do my best.

Ok, shameless plug time! I wrote a book all about my experiences on the Disney College Program and working in DinoLand. I might try to write more about my personal experiences in Disney now on the blog as opposed to the application/training process in general which is a lot of what the book covers, but if you’re thinking of doing the Disney College Program or are just interested in a behind the scenes look at what some of the training process to work for Disney is like, you can pick up Brittany Earns Her Ears on Amazon here.