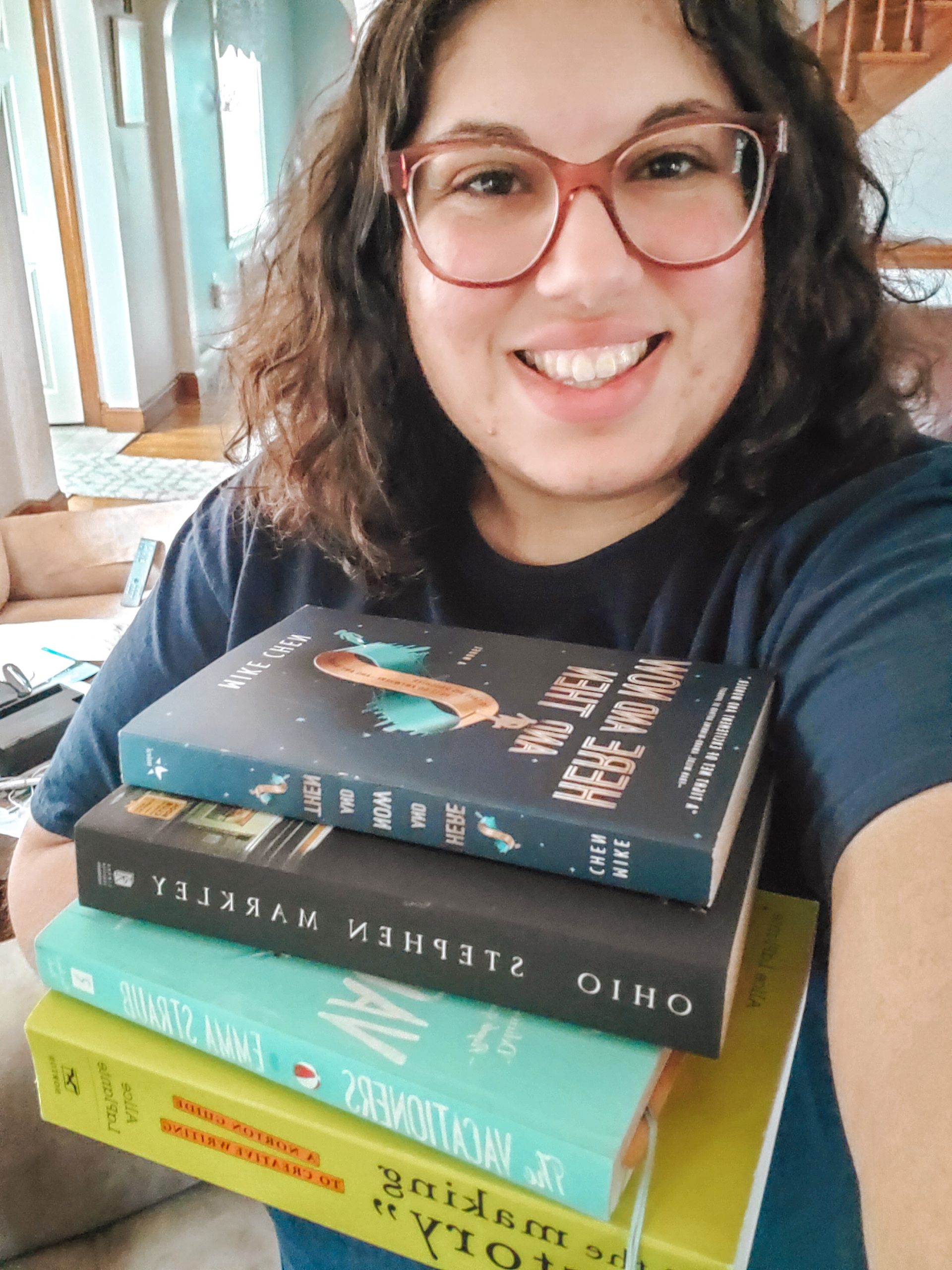 by: Brittany DiCologeroPosted on: May 4, 2020
Spread the love

So I have this problem with reading in general that I think has only gotten worse while I’ve been home, and that problem is that I read too many books at once. I guess it’s not a problem because that’s just what I like to do, but what it means for purposes of a post like this is that I haven’t actually finished reading any of these books despite the fact that today is Day 51 of quarantine. Maybe a post filled with thoughts on half-read books will be interesting though- there really shouldn’t be any risk of giving away spoilers or anything like that since even I don’t know what happens. Or maybe when I finish them I’ll just review them all in another post, we’ll see I guess!

The Making of a Story by Alicia LaPlante Usually when I say I’m reading multiple books at once, they’re books that are all totally different. However it’s worked out now (or rather with at least partial blame on my not being able to go to a library or Barnes and Noble and my eyes hating the Kindle) this is really the only non-fiction I’ve been reading.

For someone who hasn’t written fiction in (oh my God…) about 10 years, this book has been a great resource for  getting back into creative writing. I’m only about a quarter of the way through it, but I have a notebook devoted to some of the exercises in here (and I’ve actually done a couple multiple times on different topics, basically I’ve just been using some of it as writing prompts when I’ve been lacking motivation creatively while I’ve been home). It’s definitely been useful for strengthening character development and working on skills that I’m sure I could use improvements on like how to make the most out of narration based on what you’re writing and making non-fiction pieces more creative. I’ve heard lots of good things about Elinor Lipman but this is the first of her books I’ve read–I’m also about halfway through this one and really enjoying it so far. It was recommended to me as something I’d get a lot out of based on where I’m currently at in life I guess, and so far so good on that respect. The plot follows a woman whose mother, a teacher, had a fascination with the class of 1968 and whatever the case may be the situation prompted the class to dedicate their yearbook to her. She attended each class reunion and left notes by the students’ photos in the yearbook (not all of which were favorable) until her death. The story begins with her daughter Daphne cleaning up her apartment and tossing the yearbook, when it’s picked up by a neighbor claiming to be a documentary film maker who wants to uncover the secrets behind the notes.

It’s definitely partly a feel-good romantic comedy with bits of drama sprinkled throughout, and I’m already interested in reading more by Lipman as it’s truly well written. The style of this kind of reminds me of chick lit or a beach read, but far more intelligent than what you’d usually think of for those genres (and I hope that’s not offensive to everyone who’s ever given me a beach read, but honestly the hype in those kinds of books is really that they’re so quick and easy to read and they take little effort, at least in my opinion). This comes with the same ease and enjoyment, but I’m getting a lot more out of it.

Here and Now and Then by Mike Chen This book is entirely unlike anything else I usually read, which is exactly why I bought it as I sometimes feel bogged down in reading the same kinds of books all the time. The story follows Kin, a seemingly ordinary man, but the catch is he’s actually a time traveling secret agent. His present is the year 2142 but due to a mission gone wrong he finds himself trapped in 1990s San Francisco.

I’m only a couple of chapters in, but basically his rescue team arrives to help get him back to the future after he’s been living in the past for 18 years. So what follows is an internal struggle of Kin trying to maintain a presence in both times and deal with his new present while deciphering the fact that he has a family he hasn’t seen in the future in almost two decades. So far it’s a little Time Machine or Time Traveler’s Wife, but more modern and with more relatable characters. The writing and the story is really witty and clever so far, and I’m really enjoying the fact that it’s not something I’d usually go for. Admittedly I’m only one chapter in (I need to get my lack of attention span with books under control and start reading just one or two at a time…), so I can’t offer much perspective on this one yet but essentially the story follows a group of former high school classmates on a journey of self discovery and a dive into their pasts when they meet one night in their small Ohio hometown.

As I’m only on the second chapter I don’t have too much I can say about it, but I can say what prompted me to pick up the book was that I tend to enjoy stories that are rather plotless- that’s not to say that nothing happens, but more that it doesn’t have a typical plot. In this case, the entire novel is set over the course of one evening, so I’m assuming for a story based on characters like this to happen over one night the character development has to be really well done, and that’s something that I’d enjoy reading just from the perspective of appreciating something that’s so well written (assuming it works). Guess I’ll have to update this once I get more into it….

Now I can’t believe that I’m going to say this but…it was announced today that Stephanie Meyer will be releasing a new book in the Twilight Series, Midnight Sun, told from Edward’s point of view. I know Twilight is so cringy, and I could barely even get through the last couple of books when I was the right age for it, but if the world still isn’t back to normal by the time the new book comes out in August, I will most likely be picking that up. I’m not necessarily expecting to enjoy it, but quarantine has been some special kind of weird so why not throw a new Twilight book into the mix if we’re still keeping this up. (I really hope things are better in August, and I’ll actually still be reading Midnight Sun but while laughing on the beach with friends, but we’ll see….🤞)

+ I have a couple of books still that I bought and haven’t started yet, so these will be next. But if you have any recommendations or just want to share what you’ve been reading for the past two months, leave a comment below!