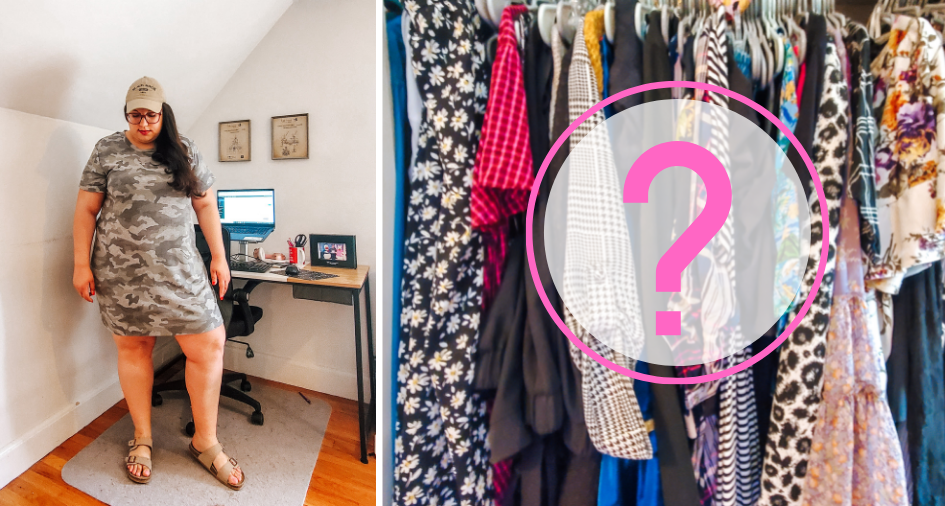 by: Brittany DiCologeroPosted on: May 8, 2022
Spread the love

I knew the current state of my closet was…not great, but I don’t think I knew how bad it was. Before you read any further, please know I don’t mean this in the sense of putting down my body or anything like that, but rather, I’m really quickly realizing I don’t know what I like in terms of clothing. My first weekend of really being more intentional in putting outfits together was sort of eye-opening already in terms of seeing what I like and don’t like. Let’s just jump into it…

On Friday, I really did not do much besides work (and watch the Johnny Depp/Amber Heard trial, because I am so invested and I can’t stop watching it.) Knowing I wasn’t planning on leaving the house, and knowing that it would be sort of warm out (so I’d have all the windows open in my apartment) I wanted to wear something that would still make me feel put together for the workday without being too much where I knew I wasn’t going anywhere. I also wanted to jump right into a piece of clothing I’ve had for a while but don’t really wear, thinking if I wore it for a whole day I’d end up with an opinion on if I should keep it or not. I landed on this camo print t-shirt dress, baseball cap, and Birkenstock-like sandals (Target knockoffs).

Likes: I like how the dress looks on me. Maybe it’s the Peloton I just got (birthday gift to myself!) but I think my legs look better than I would have expected, and while I would have been hesitant about a t-shirt dress on my body when I was younger, I’m pretty happy with how this looked.

Meh: I don’t hate the hat, and it seemed like a good idea before I saw the finished look, but at least with the camo I think it’s a little much. I’m also mixed on the shoes with this dress, but again I wonder if it’s just the print that’s throwing me and maybe this would all work if the dress were a solid color, or even stripes or something a little less busy. Baseball hats are also tough with my glasses. Maybe that’s overthinking, but I prefer them with contacts, it just feels like a lot’s going on with my face/head I guess.

Dislikes: The camo. I don’t think I’ve ever loved camo honestly, I think this dress was a case of it must have been cheap at Marshall’s or something because I really don’t know why I have this.

Keep? I’m not sure. I lean toward no for the fact that it was nice to wear for a day to learn that I like the style of a t-shirt dress, but if I don’t love the camo I’m not sure I’d ever reach for it to wear it out anywhere. That being said though, it is comfortable and served its purpose of feeling like I got ready for the workday while working from home, so I think I’ll keep it until I get a new one?

I only wrote a couple of short articles on Saturday so I really did not end up working all that much. Instead, I went out for breakfast with Josh and we went to Target, then we just spent the rest of the day hanging out at home. For Saturday’s outfit, I think I had a vision in my head for what I wanted, but the execution wasn’t quite there… I was trying to go for something casual but still interesting I guess, and I don’t think it really worked. The piece I wanted to see if I should keep was really the shirt, and I think much like the camo dress, I don’t love the shirt but it was a good learning experience. I originally had a necklace on but the length was weird in that the pendant on the end kept ending up in my shirt so I look it off. I think this outfit needs a necklace or a belt or something as it’s a little too plain, in my opinion. That being said…

Likes: The overall idea. I think with a necklace that worked better with the shirt, and a different yellow long sleeve shirt, I would have really liked this. I think a higher maybe mock neck shirt or bodysuit with a midlength necklace would have looked a lot better. This shirt is one of those really old ‘super soft’ I think they’re called t-shirts from Old Navy that probably wasn’t designed to be tucked in (I think the extra fabric is making my body look wider than it is, hence why I think a bodysuit would have been an improvement). So I like the idea for the look, but not necessarily this shirt. I also love these jeans, I just bought them and will probably get them in a darker wash soon!

I liked the makeup and earrings that I wore with this, too: Meh: The execution. Literally, what I just said, I liked the idea but the execution was meh. I would be curious to try this look again with a better top and accessories.

Dislikes: I love my bag here (it’s a light blue Coach bag with daisies on it) but I don’t love it with this look, and I’ve already realized this weekend that I don’t have enough bags, so part of my problem is prints that oddly clash with outfits because most of my bags are printed. I’d rather a plain bag with this look and probably a different style. I also don’t love my off-brand Birkenstocks with this one. I put them on because realistically they’re really comfortable and I’d wear them with most outfits without even thinking, but I think converse or something like that would have looked better here.

Keep? Obviously keeping the jeans where I just bought them, the top is getting donated though. I used to wear this a lot during the fall when I went into the office with a scarf over it, but now that I don’t feel like I need it as an easy/comfortable thing to wear to work, I’m not sure I’d ever reach for it again.

Today was Mother’s Day, but we kept it really casual and went to Border Cafe for lunch then just spent the rest of the day at my parents. I really went with clothes I have but never wear to put together an outfit for today, and this is what I ended up with: Likes: Not much, honestly. I like the sweater but I don’t like how it looks over the long tank top (I feel so old, I know that’s like a thing millennials would do in our youth and I just did it today…) The sweater is cute and that’s really it.

Meh: The entire thing. Like it’s fine, if I saw someone wearing this I wouldn’t think anything of it, but do I like it? No.

Dislikes: The long cami underneath the sweater, it looks really silly and I hate it here. I don’t like the jeans, they’re old and don’t fit great (I probably got them in college) so maybe that’s why, but I don’t love the shape of them on me and if I were to keep them I don’t really know how I’d style anything with them unless I just threw a sweatshirt on or something. Note: I don’t know why the sweater looks so weird in this photo, it’s like almost mesh, like knitted thickly so there are basically holes all over it so you can see the cami underneath, I don’t know why it looks like static or something here but that’s not how it is in real life so that’s odd. Maybe I do dislike the sweater…

Keep? Keeping the sweater (for now anyway), and donating the cami and jeans.

That’s it for this week! I did enjoy doing this and I thought it was really helpful. I’m excited to see what the next week brings (+ I just ordered some new clothes so I can’t wait for that, too!)