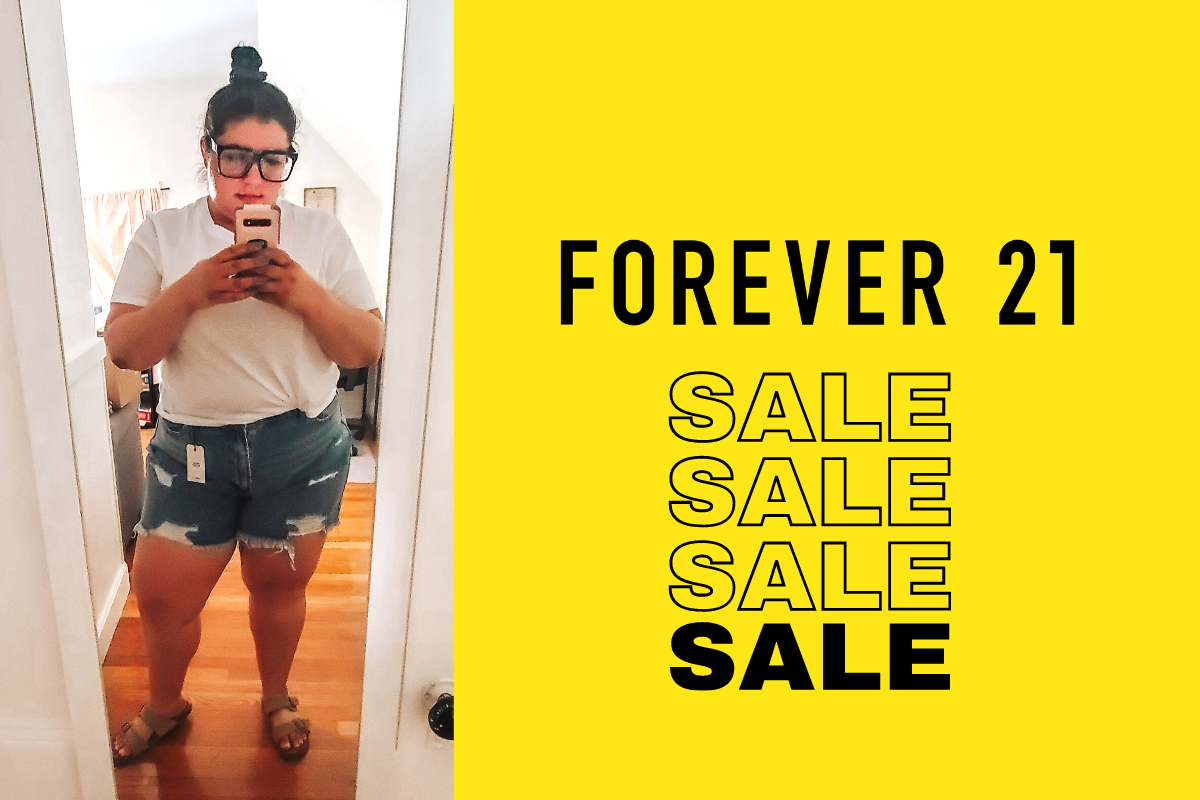 I recently ordered some things from Forever 21, just to try out some new-to-me styles that I wouldn’t ordinarily wear without spending a ton. I don’t normally shop Forever 21 that often, I really only ordered from there because I noticed they were doing 15% back with Rakuten and where I didn’t want to spend a lot, that seemed like a good idea.

I used to ~try~ to shop at Forever 21 when I’d actually go to the mall more when I was younger, but unless things have changed their sizing is stupid in that I wouldn’t normally fit in their straight sizes unless a random L or XL just happened to run big (because again, their sizing at least in the past made no sense), and most of their stores didn’t have plus size sections. (Maybe that’s changed, but I really never shop in person now so I wouldn’t know.)

Anyway, here’s the random assortment of sale items I ordered plus my thoughts- These pants do not look anything like how they looked on the model on me, and I’m not a fan. I think for them to tie and for the pulled fabric to look how it does on the model around my hips, I’d have to get a bigger size, but these were already so big on the waist there’s no way I could have sized up. I really wanted to like them as something light and summery, but the way the second layer flows on me and the tie situation, I’m just not a fan. I can’t return any of this stuff as it was all final sale, but for $10 (or less after the cash back), I can take the loss here.

The white tee shirt is fine, it’s just one of Forever 21’s basic tees. I’ve never purchased any basics like this from them before but it was less than $5 so I’d definitely pick up more of these if I needed them. These shorts are yet another instance of my thighs causing problems. I actually do like how they look on me, but they’re nothing like how I thought they’d be given the picture. Or rather, they are nothing like what I wanted them to be, I figured they would be tighter on my thighs because well, everything is.

The waist on these shorts is somehow just a tiny bit too small, so I probably could have actually sized up in these. They zipper/button fine but just aren’t the most comfortable. I wouldn’t normally keep something that’s too small, but they do seem like they could stretch a little and I really fluctuate between two sizes so there’s a good chance they’ll fit perfectly soon, so keeping these! I’m torn on this one (also sorry the lighting is horrible in my photos, the spot where this mirror is in my apartment is really dependent on there being good lighting outside which was not the case when I tried these on. The color is more like the website photo.) But I’m torn because it obviously doesn’t fit me the way it looks in the picture. I don’t hate how it is on me, but it’s a totally different style where on me it’s much more cropped and fitted. I’m not even sure sizing up would have helped, I think it would still have this cropped look and just be slightly less clingy. I’m keeping it for now, but I’m really not sure. I like this sweater! It’s kind of frumpy, but also I’m kind of into it. I thought it would be a really great option for spring where it’s still cold for most of spring in New England, so having some less wintery-looking sweaters could be useful. It’s just really itchy, so I’d definitely want to wear something under it, and I don’t know how to style the rest of an outfit with this off the top of my head.

That’s all I got! I’d say the basic white tee, the sweater, and the shorts I’m 100% keeping, the orange pants are a pass, and the floral tank I’m still thinking about.