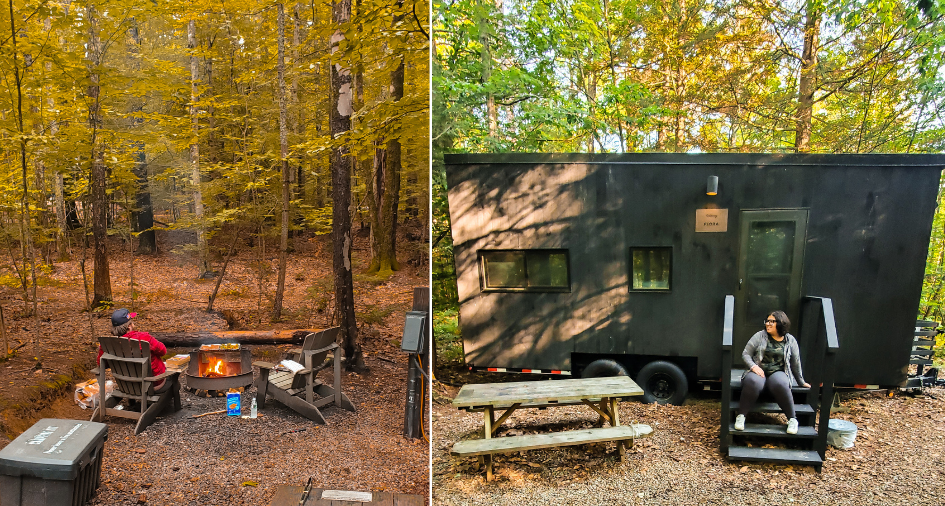 by: Brittany DiCologeroPosted on: September 13, 2022
Spread the love

Have you ever tried to plan a relatively last-minute vacation that was also in driving distance of home in case your diabetic cat needed you, affordable (so that if said diabetic cat did well staying with my mom/his grandma you could plan a longer trip soon and save the extra money for that)? Just me? It was this situation that recently brought Josh and I to Getaway House for four nights.

I don’t write a lot of reviews on this blog, but this one feels necessary because finding reviews of Getaway House when I booked my stay was surprisingly challenging. I guess I should rephrase that….Finding reviews that didn’t seem sponsored was challenging. I usually don’t have an issue with sponsored posts as it’s typically easy to find just as many non-sponsored ones, but this felt like a challenge with Getaway House. On top of that, I think there might be more unsponsored posts than my search let on, because Getaway House gives everyone a code to refer stays to friends that gives them discounts of their own (mine is included at the bottom of this page, because why not, but this post is 100% honest and non-sponsored.)

Anyway, we chose Getaway House for the reason I’ve already mentioned. Aside from my friend’s bachelorette party weekend (which was doable because Josh obviously stayed home) we haven’t been able to travel at all since Maui was diagnosed with diabetes last year. I don’t love the idea of boarding the cats, and I haven’t even found luck in finding a boarding facility that would both give him his insulin shots and test his blood sugar, and having a vet tech come to the house wasn’t an option because the cat is a giant baby who hides from strangers.

With all of this in mind, I had begun bringing Maui to my parents’ house at least once a week so he could get used to my mom enough to stay there and have her manage his diabetes routine. This seemed to be working out, but where it would still be our first time leaving him I wanted to play it safe and go somewhere close enough where I could come home if I needed to.

Keeping this in mind, we looked for places to stay for a couple of nights around New England, largely Maine and the Cape. I wasn’t even really considering Getaway House, or a camping/glamping kind of trip honestly, until I was served an ad on Instagram for their Labor Day special, a savings that amounted to us paying a total of $485 for four nights. That was enough to me to book the stay as my expectations were really just to get away with little preference as to where since I just badly needed a vacation.

In case you are unfamiliar, Getaway House’s whole model is that they are places to disconnect. It kind of sounds silly that you need to be forced into this tiny house/box and lock up your cell phone to fully get it, but I don’t know…it worked for me. They have outposts located near a lot of major cities across the country, and the two near Boston are in New Hampshire and Connecticut (we went with Blake Brook in Epsom, NH).

When we arrived at Getaway House, I immediately loved the whole setup. I’ve never been camping, and really don’t think I’d enjoy it so right away Getaway House seemed like a nice way to me to unwind in the woods without traditional camping. The cabins are very small, basically think the tinier side of a ‘tiny house,’ but with everything you would really need to have a great trip.

They have their own private shower and toilet inside the cabin, a kitchenette with a sink, fridge, and hot plate, a pot and pan plus plates and silverware, a desk/table, and bed right next to a massive window with a view of the woods. Outside the cabins have a picnic table, chairs, and a firepit along with wood and firestarter you can purchase. We brought hot dogs, sword fish, broccoli, carrots, and everything for s’mores to cook over the fire during our stay, but it was raining when we arrived. The rain continued for the first two days of our trip, so we made the hot dogs on the hot plate inside the cabin.

Getaway House encourages you to stash your phone away in their cellphone lockbox to have a totally disconnected stay, and I mostly did that with the exception of checking texts from my mom about Maui. Part of it could have just been that we were both so burnt out and needed a vacation, but even though the rain ruined our plans to sit by the fire that first night, making hot dogs in the cabin and reading and journaling with the sound of the rain and view of the woods was incredibly relaxing. One note about the kitchenette: I brought my own pot, coffee mugs, French press, and utensils. All of this was provided by Getaway House (well a pourover for instant coffee, not a French press) but I’m a bit of a germaphobe and would rather use my own.

The bed at Getaway House was incredibly comfortable and I think that first night especially with the rain was one of the best sleeps I’ve ever had. It could be the burnout talking, but I woke up more rested than I had been in a long time.

About the large window by the bed; A lot of the negative reviews from Getaway House mention that the window isn’t as private as the company makes it appear on their website and social. Some mention being able to see right into other cabins, and being disappointed that they had to keep the shades closed to get full privacy. While each campsite is not entirely private, this was not our experience by any means. The cabins had three-four windows; Ours had one in the bathroom (high enough that you couldn’t see anything from outside) facing the road, and two on the side facing the road/our picnic area, plus the one by the bed. We did close the side windows because in theory if those were open you could probably see the bed/desk from outside. I really don’t think you could honestly unless you were walking closeby and really looking, but the big window is really all that mattered to us anyway so we just kept the small shades shut and didn’t think of this “lack of privacy” for the rest of our stay.

As for the big window, the view is a lot of trees. If you looked straight back through the trees, we could barely see another cabin (for reference in the map below, we stayed in Flora, so it must have been Norah that we could see in the distance).

The other cabin was situated so that their chairs by the fire had their backs to us and their big window wasn’t facing our direction. I don’t think they could see us, and honestly I probably only noticed them because the reviews I read had me on edge over it. I could just barely tell that there were people staying there because of the movement through the trees or very distant lights from their car but I seriously doubt they could see us. I get the concern when you have the lights on at night with that window, but they were at least 50 ft. away with A LOT of trees between us, so I don’t know…I wasn’t too worried about it.

I also wasn’t expecting total privacy. I can see how the marketing makes it seem that way, but in my limited experience visiting other campgrounds I actually found Getaway House to be incredibly private. Even the other cabins that were closer to us were arranged in a way that we couldn’t see our neighbors unless we walked around to the front and intentionally looked for them, and with guests asked to be quiet and respectful anyway it didn’t feel like there were other people around at all.

Inside the cabin also came with a guide to the area that outlines hiking trails and the nearest grocery stores. We didn’t hike while we were there because Josh just wasn’t up for it, but if you wanted to there is one trail in walking distance and Bear Brook State Park very closeby.

We really did spend most of our time at the cabin aside from a daytrip to Vermont the first full day of our stay. Otherwise we explored nearby antique stores, went apple picking, and to a couple of restaurants, with plenty of time to read and relax by the fire.

Unless you’re into the nearby antique stores or hikes, or taking a longer daytrip something else, there doesn’t seem to be a ton to do around Epsom, NH. It was fine for us and really the perfect treatment for burnout, but I point this out because Getaway House is really just to getaway from the stress of daily life. If you are looking for more traditional camping activities you really won’t find them here, at least not without driving to the state park.

I heard from friends who stayed there that two nights was enough before you get bored. I was so burnt out that I enjoyed being bored, and sleeping in then waking up to the view from that bed was enough for me, honestly. I guess it could depend on your need to getaway, but I’d also throw that out there for a consideration that if you are looking for more activities (or even just a TV or Wi-Fi), this probably isn’t it. (Though Josh did watch a football game on his phone one night.)

The last thing I’ll touch on is the price since that seems to be the other negative point that causes poor reviews of Getaway House. I really enjoyed our stay and would 100% do this again…but not for full price…probably not even for the mid-level pricing…It would need to be a deal like the one we used or just about $150/night or less for me personally.

Because of the midweek Labor Day special we used, our stay was $122/night after taxes. To take advantage of that special you had to book all four nights on those dates, checking in Monday and out Friday, which obviously isn’t doable for everyone. There are weekend nights later this month and through the rest of the year where Getaway House (at least the Blake Brook location) is priced at about $400/night, and I have to agree with the comments that that feels absurd.

We specifically chose Getaway House because the pricing was such a deal compared to the other places to stay we were looking at, and while I really enjoyed the whole experience I completely agree with other reviews that say $400/night is luxury hotel pricing, not tiny house in the woods pricing.

It does look like if you book really last minute (as in a day or two before) you can find stays for $129/night which is closer to what ours cost, and what I would be comfortable paying to stay there again. I should also note that in addition to firewood and firestarter, some ‘provisions’ (coffee, tea, etc…) and a s’mores kit are available for an additional fee, though we opted to bring our own.

Almost 2,000 words later…I loved Getaway House and would love to stay there again, but only if I get a deal on the price. And (again not sponsored, but why not) if you are interested in booking a stay, you can save $25 off your first stay with my referral link.)