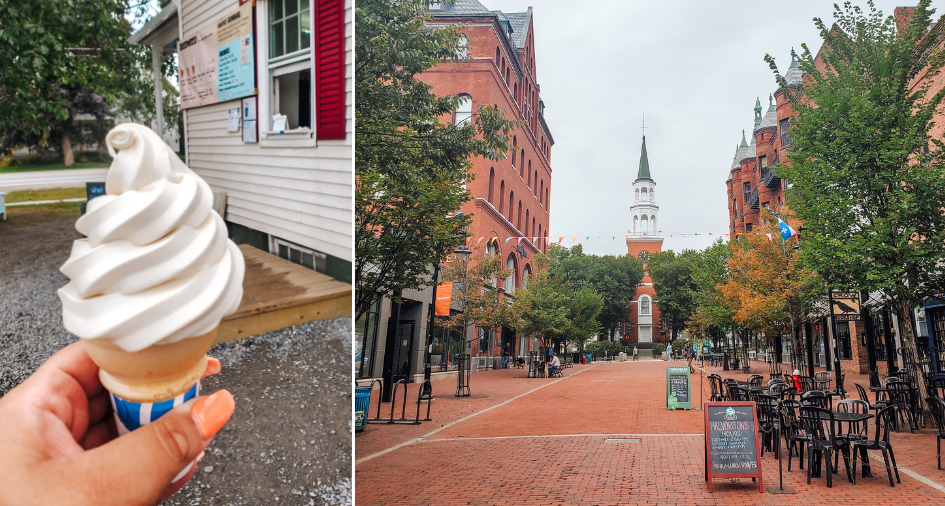 During our recent stay at Getaway House, we spent a day exploring Burlington, Vermont. With only one day there, and a laid back, last-minute day trip, with pretty lousy weather on top of it, this post is not meant to be a travel guide by any means, but just a fun rundown of what we did with one day to explore.

Burlington is about a three-hour drive from Getaway House, Blake Brook. We should have left earlier than we did in theory, but this whole day trip was so unplanned, and we didn’t want to get up too early or over plan because the point of Getaway House was to relax, so we left at about 10:00 a.m.

The drive was fine, and it would be gorgeous during foliage season. Unfortunately during our trip, it was rainy and that exact annoying kind of early fall weather where you can’t decide what to wear; the kind of weather where you put a sweater on in the morning and regret it by the afternoon.

We planned on parking in one of the garages near Church Street, which is basically the center of Burlington where many of the shops and restaurants are, but on the way we stopped outside of town to visit the Ben & Jerry’s Flavor Graveyard. I love graveyards, (and cemeteries, which this actually is as graveyards are attached to churches, but “Flavor Cemetery” obviously wouldn’t sound as catchy and these are tombstones for ice cream anyway, yes I’m a huge geek) so we had to stop and check it out.

I’ve heard from others that the Flavor Graveyard is underwhelming, and to that I’m just not sure what people are expecting, I mean, it’s a set of tombstones for retired ice cream flavors. If you like graveyards (or cemeteries), ice cream, and kitschy roadside attractions, I think it’s worth the stop. The Flavor Graveyard even has an audio tour you can take with your phone by scanning QR codes on the stones, and if the weather weren’t so gross during our visit I probably would have done all of them.

We didn’t go inside Ben & Jerry’s for the factory tour, which I think is the real reason most people stop here with the Flavor Graveyard just being the added bonus, so we’ll have to do it next time. This time, we were on a time crunch with only one day to spend time in Burlington and us still being a little ways out of downtown.

When we arrived downtown, we spent some time checking out the shops on Church Street. One of my favorite stores was Crow Bookshop, which carries new, used, and remainder titles. We spent a long time in here and I think purchased at least three or four books each. Golden Hour Gift Co. was also a fun store that I spent a lot of time in, where I didn’t intend to do much shopping but ended up leaving with a mug, stickers, and nail decals.

We also saw the first Ben & Jerry’s, which is the one downtown as opposed to the factory with the Flavor Graveyard. We didn’t stop in because we already had ice cream plans for later in the day, but that’s something I’d probably do next time I visit.

For lunch, we stopped at Halvorson’s, by virtue of we were hungry and it was right there (on Church Street) since we didn’t plan this trip at all, but the food was delicious. After enjoying some chicken wings, spinach and artichoke dip, and poutine, we stopped at one more bookstore (Phoenix Books) then went back to the car.

I’m sure this barely scratches the surface of what there is to do in downtown Burlington, but this whole vacation was a really low key trip so it worked for us. We will be back for sure to actually stay in Vermont and spend more time here (we didn’t even see Lake Champlain this time…) but for this trip there were a few other things we wanted to do before heading back to Getaway House. For one, we wanted to find a farmstand with fresh apple cider, because even though it wasn’t officially fall yet it felt like fall and apple cider seemed like a good choice for something to sip on by the fire back at Getaway House. Weirdly enough, we never found apple cider (both in Vermont, and even believe it or not, at the farm we went apple picking at later in the week in New Hampshire. I don’t really know how it all works, but I’m guessing it was too early for cider?) We did find maple syrup and a few other maple treats, like maple pumpkin bread, that we stocked up on at a sort of random farmstand we came across on our way to our next stop.

Before we left Vermont, I really wanted to try a Maple Creemee since I’ve never had one before (basically maple soft serve ice cream.) Since this was a Wednesday in the off-season, or at best shoulder season, it was surprisingly difficult to find a place that sold creemees that was open. We landed on Palmer Lane Maple in Jericho, VT (a little ways outside of Burlington) and while this was totally a random choice as most other places weren’t open, it definitely turned out to be a good one! I wanted to try a Maple Creemee just because I like trying things specific to the place we visited, but I was honestly hesitant that I would actually like it. I don’t love flavors that are overly sweet, and I wouldn’t say I’m a huge fan of maple, but this Maple Creemee was delicious. It was essentially a really creamy vanilla soft serve with just the right amount of maple flavor, making it totally unique and tasty but not too sweet for me. Palmer Lane Maple was a little bit out of the way, but well worth the visit if you’re looking for a Maple Creemee near Burlington.

That wrapped up our trip to Burlington, as we drove back to Getaway House after our ice cream. It really was a nice day trip from Getaway House; especially for the bookstores as we had plenty to read while hanging out in the cabin for the rest of the week, but I can’t wait to go back and see Lake Champlain, along with some of the breweries and historic sites.